Oregon DUI trials can be tried to a judge alone, or to a jury. There are many factual, legal, and tactical considerations when analyzing how to try a DUI charge in Oregon.

Under the United States Constitution and the Oregon Constitution, the defendant is entitled to a jury trial if accused of a crime. This protection applies to any type of Oregon DUI charge.

In Oregon there are six-person juries for misdemeanor DUI’s and 12-person juries for felony DUI’s. Although jury trials are the standard in most criminal cases including Oregon DUI’s, in some situations, the accused may wish to waive his right to a jury trial and have a bench trial instead.

In Oregon DUI trials there are not different laws or legal requirements for bench trials. If the court grants the defendant’s request for a bench trial, the prosecution must prove that the accused drunk driver is guilty of the Oregon DUI charge beyond a reasonable doubt. The judge determines if the prosecution actually did that.

Numerous factors go into determining whether the defendant should or should not waive jury trial in an Oregon DUI case. Both judges and juries are required to consider the evidence objectively and leave sympathy and emotion behind when they are deliberating. Nonetheless, jurors and judges have different life experiences.

Judges deal with grieving victims and families every day and stories that may shock jurors and even bring tears to their eyes may seem to hardly affect a judge. Judges also have a much better understanding of the law than jurors. As such in a case that involves complicated legal details it may be wise for the defendant to choose a bench trial. Typically bench trial proceedings in Oregon DUI cases are less time-consuming and less formal than a jury trial.

On the other hand, jurors may be more compassionate and more sympathetic to evidence brought out at trial.

Perhaps however, the biggest difference is at jury trial the defendant’s fate is determined by a six people in an Oregon misdemeanor DUI case and twelve people in an Oregon felony DUI case rather than by one person in a bench trial. Many feel that when six or twelve minds collaborating are better than one.

Under the Sixth Amendment, every U.S. citizen has the right to a trial by an impartial jury of peers. Juries are composed of everyday ordinary United States citizens, most likely because jury service is considered a compulsory duty for nearly every American.

In the majority of states and in federal courts, juries are made of twelve people who must all come to an unanimous decision in order to convict. If a jury cannot come to an unanimous verdict then they are called a hung jury. In Oregon a hung jury in a six-person misdemeanor DUI case leads to mistrial which means that the entire case may have to be retried.

In the State of Oregon, Driving Under the Influence of Intoxicants (DUII) is either a Class A misdemeanor or a Class C Felony. Depending on what the defendant was charged with determines how many what type of jury trial the defendant receives.

Unlike most other states, Oregon also has six-person jury trials in misdemeanor cases including Oregon misdemeanor DUIs. In a six-person jury, all six of the jurors must agree to acquit or convict and their decision must be unanimous. Burch v Louisiana, 441 U.S. 130 (1979).

Six-person juries in many ways function just like 12-person juries. For example, prospective jurors in six-person juries may get kicked off of the jury pool if they don’t speak and understand English very well or if they are unable to be unbiased and impartial concerning the case at hand. In an Oregon DUI case, each side’s attorney will ask questions of the jury pool to determine if the prospective jurors are impartial to their case. From these answers, each side’s attorneys help choose the jury before the Oregon DUI trial begins.

Jurors is six-person Oregon DUI trials are required to swear to be impartial and to keep their deliberations in strict confidence during the course of the trial.

In Oregon DUI cases, after the judge instructs the jury on the Oregon DUI charges and sends the jury to deliberate, the first thing the jury does is designate who will be the foreperson. It is the foreperson’s responsibility to lead the discussion and ensure that the jurors are thinking and talking about the issues presented at trial. The foreperson oversees the voting process, counts the votes, and completes and signs the verdict form.

It is the six-person jury’s responsibility to listen to all of the evidence presented at trial by both the plaintiff’s attorney and the defendant’s attorney. After the jury in an Oregon misdemeanor DUI case listens to opening arguments, sees all of the testimony and evidence presented, and listens to closing arguments the judge gives the jury instructions based upon the state’s charges.

For example, a misdemeanor Oregon DUI trial has different jury instructions than a felony Oregon DUI trial. In Oregon DUI cases, the jury is responsible for findings of fact and judges are responsible for findings of law. Sometimes in Oregon DUI cases a judge decides both questions of law and questions of fact and there is no jury, this is known as a bench trial. After the Oregon six-person jury receiving the jury instructions the judge, the six-person retires for deliberation in order to consider a verdict. Their verdict must be unanimous. Burch v. Louisiana, 441 U.S. 130 (1979). 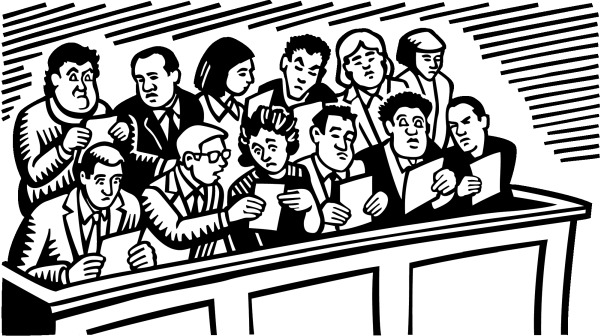 If a DUI charge in Oregon is charged as a felony, it’s because of prior DUI convictions. If a defendant charged with an Oregon felony DUI decides to proceed to jury trial he will be given a 12-person jury to be the trier of fact. In the federal courts and most states, juries are composed of twelve people. In order to convict, the twelve jurors must come to an unanimous decision. If they cannot come to a unanimous verdict then the jury is considered to be hung which will lead to mistrial which may mean that the entire case must be retried. However, this is not the case in Oregon in felony DUI trials.

In 1972, the Supreme Court determined that criminal defendants, including those charged with Oregon DUI’s, may be convicted with a less-than-unanimous vote. Apodaca v. Oregon, 406 U.S. 404 (1972). What this means is that in Oregon juries don’t have to come to an unanimous decision except for in death penalty cases. In Oregon felony DUI cases, if just ten of the jury members come to agreement that is enough to either convict or acquit someone of an felony DUI.

In an Oregon felony DUI case, members of the jury are chosen through a process called voir dire. During this process, the prosecutor’s attorney and the defendant’s attorney each ask questions of the prospective jurors.

All jurors in Oregon felony DUI trials take an oath to be impartial and to keep their deliberations in strict confidence while the trial is proceeding.

At the end of closing arguments the judge instructs the jury based upon the defendant’s charges. For example, a misdemeanor Oregon DUI has different jury instructions than a felony Oregon DUI. After the Oregon 12-person jury receiving the jury instructions the judge, the 12-person retires for deliberation in order to consider a verdict and once ten people come to an agreement the foreman will announce their decision to the court.

Here are a couple of other practical or philosophical considerations with regard to taking a DUI charge to trial:

While there are certainly common patterns in DUI cases, every case is different because there can be subtle issues and nuanced facts which can give rise to possible defenses. If you are considering a DUI trial and if you want to know more about Oregon DUI trials, do yourself a favor and don’t just read the tough talk on attorney/lawyer websites which talk about how they receive nothing but “not guilty” verdicts. Make sure you speak with a candid professional who can carefully detail for you the likelihood that your case will result in an acquittal.