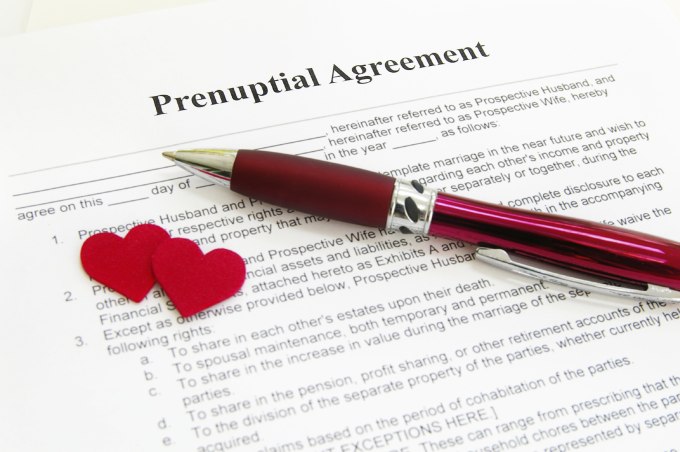 Most people have heard of prenuptial agreements or “premarital agreements,” although they’ve probably usually heard them referred to informally as a “prenup” or “prenupt.” Most people might also think that prenuptial agreements are only for celebrities or the wealthy. This is not the case. Prenuptial agreements can be an excellent tool and option for parties wanting to have more control over their finances and  future– rather than essentially handing their entire lives after divorce to a judge whose rulings or findings could be somewhat unpredictable.

Prenuptial agreements in Oregon are governed by the Uniform Premarital Agreement Act (UPAA), which was adopted in 1987 and codified as ORS 108.700–108.740. Under the UPAA, the agreement must be in writing and signed by both parties, the agreement becomes effective on marriage, and– after marriage– the agreement may be amended or revoked only by written agreement signed by both parties. Also under the UPPA, a prenuptial agreement may not reduce or eliminate a child’s right to support from a parent. Also, if the terms of spousal support in a prenuptial agreement would cause a party to become eligible for support under a program of public assistance at the time of separation or dissolution, a court may exercise it’s discretion and judgment to modify the terms of the agreement  to require the other party to provide support to the extent necessary to avoid eligibility or dependence on public assistance.

Parties to a prenuptial agreement are not required to have separate attorneys, but it’s certainly advisable. In fact, it would be best for each party to have completely independent attorneys (e.g. not two attorneys at the same firm or office). Part of the the reason for this is that there could very well be inequities in the parties entering into a prenuptial agreement and it’s critically important that any party giving up rights that they might have in the marriage– or in a subsequent divorce– should know what those rights are, and what the consequences might be in giving up those rights. Looking at this from a different perspective, a party to a prenuptial agreement attempting to eliminate or restrict the rights of the other party will want some evidence that the party who agreed to forfeit or restrict their rights did so knowingly and voluntarily, or the court may not enforce offending provisions the prenuptial agreement.

Prenuptial agreements are complicated and should be handled by attorneys. In an effort to save money, some people might be tempted to purchase a form at an office supply store, to purchase or download divorce/family law software, or in some cases to download a random prenuptial agreement template in the hopes of drafting their own, but it’s simply not worth it. An unenforceable prenuptial agreement doesn’t do anyone any good, and it creates more problems than it solves in terms of uncertainty and possible future litigation.

“What is a prenuptial agreement?”

At it’s simplest, a prenuptial agreement is a contract between two adults who intend to marry. It is an agreement and a legally-enforceable contract as to how the parties will share and divide their assets, debts, personal property, real property, bank accounts, retirement, gifts, and inheritances– as well as whether either party will pay spousal support to the other– in the event of death or divorce.

“Who should get a prenuptial agreement?”

Everyone and anyone considering marriage. Many people mistakenly believe that prenuptial agreements are only for the wealthy or celebrities, but the fact of the matter is that such agreements can be important for any couple that simply wants to have control over their marriage, and not leave extremely important decisions up to a disinterested judge who is unfamiliar with the parties and their circumstances, who is forced to follow nebulous laws subject to frequent changes, and who therefore may ultimately be unfair or unreasonable in a divorce.

“What does a prenuptial agreement cover?”

Prenuptial agreements can vary considerably in their form and content. They can be as simple as one page, of as detailed as a book. Typically, they cover the division of assets, debts, personal property, real property, bank accounts, retirement, gifts, and inheritances in the event of a divorce. Many couples also want details on spousal support (e.g. whether either party should pay any or a party shall receive any, and– if so– for how long, and in what amount).

No. Child custody in Oregon is awarded and parenting time is decided by a judge based on the best interests of the child, and child support is set by state law. Also, a prenuptial agreement cannot override public policies or state laws.

“How do I know if my prenuptial agreement will be enforceable in Oregon?”

This is why a consultation with an attorney is so important, and why low-cost or do-it-yourself downloadable forms are so risky. An attorney who stays current with the changes in Oregon law will be able to properly advise you as to how to create, review, and execute a form that will be enforceable in the future.