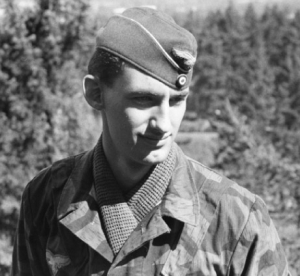 As if the Portland Police Bureau doesn’t have enough problems, Captain Mark Kruger’s past just keeps coming back to tarnish the entire department and City of Portland. That Portland– or any American city– would hire, train, and keep employed a police captain with Nazi sympathies is simply shocking.

Mark Kruger has a history of dressing up as a Nazi, erecting monuments to Nazi soldiers in Portland public spaces, collecting Nazi weapons & memorabilia, and– in his official capacity with the Portland Police Bureau– using excessive force during an anti-war protest in the city’s downtown.

Maxine Bernstein from The Oregonian has done a wonderful job covering this story, and the history of Portland’s anti-Semitic cop. She reports that the city recently settled a tort claim filed by Kruger against the city after the Portland Police Performance Review Board disciplined Kruger for bringing “discredit and disgrace upon the Bureau and the City” by building a public tribute to five Nazi-era German soldiers at a city park while employed by the police bureau. The tort claim settlement dismissed the past discipline against Kruger and paid him $5,000.

Why Would Portland Still Allow a Nazi Sympathizer to Remain on the Force?

Portland is known for it’s left-wing, liberal politics, and Antifa is largely welcomed during city-wide protests. Why would the city allow someone with Nazi or fascist symapthies to remain in a position of governmental power?  Two words: Police Unions. Police unions are powerful and their support is almost required for any city mayor to be elected, and remain in power.

When the news of this awkward story first broke, Former Mayor Charlie Hales publicly apologized for signing the binding settlement agreement, but defended his actions in doing so.

Current Mayor Ted Wheeler has been walking a fine line throughout his first term attempting to appease city residents unhappy with police actions, while still keeping support from the police union and rank-and-file.

Please take a moment to let Ted know on his Facebook wall or Twitter feed that Portland has zero sympathy for Nazi sympathizers, and that the Mayor needs to do everything he can to discharge this fascist cop from the Portland police force. Maybe Argentina will welcome Kruger?